Are you in the market for a venue? 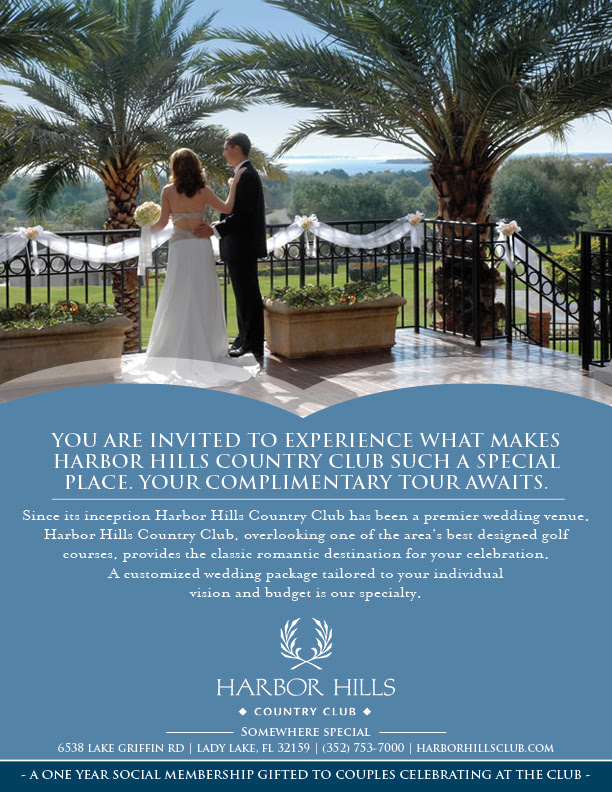 Hole #10 as Featured in the Ocala Star Banner

ELEVATION is hard to find in Florida, as are golf courses with lakefront views. But Harbor Hills Country Club, about 10 miles south of Summerfield, has both. The Lloyd Clifton course, built in 1986, hosts U.S. Open qualifiers and PGA sectionals and has been named by Golf Digest one of Florida’s 40 best public courses. It’s easy to forget all of that, however, when glaring out over hole No. 10, which slopes downward some 50 feet, with Lake Griffin serving as the backdrop.” People who come out here to play for the first time always talk about the 10th hole,” said Harbor Hills’ head professional, Brady Godfrey. “It’s beautiful, and it’s one of the hardest holes on the golf course.” Indeed, golfers distracted by the postcard-quality background can find themselves in trouble on either side of this hole. Water comes into play all the way down the left side, and sand traps and out-of-bounds lines threaten shots to the right.Club chairman Rico Albanesy snaked two shots past every hazard but still ended up in the rough. A resident for years at the course, he’s had too many run-ins to remember with the trademark hole. “The water attracts every ball if you hit just a little left,” he said. “But even if you miss the water, you’ve still got to stay away from the traps. “This hole demands more than precision, though. Playing 426 yards from the blue tees, shots must have power to make the fairway. Then you have to take a longer iron to try to hit a small, pea-shaped green. Playing with the “Average Joe”I paired up with Albanesy to try to tackle the 10th, but both of us found a little trouble. While Albanesy hit his tee shot just over the water on the left side, I wasn’t so lucky following his tracks. “There it is right there,” Albanesy said to me, pointing at my ball in water that was shallow enough to see but too deep to reach. After taking a penalty stroke and dropping in the rough over 130 yards away from the green, I chopped a 9-iron shot onto the putting surface, though the ball rolled 35 feet away from the hole down a small ridge.Albanesy’s second shot bounced over the green, and his chip shot landed him 20 feet past the hole. Now, on the same stroke, I stepped to my putt and slammed it to within a foot of the cup for a gimme five. Albanesy followed suit and left his putt a tad short, but he also converted for bogey.”Lookey there – we tied the hole,” he said. “You got a little lucky with that five.”If he thinks that was luck, we should do it again.- Joe VanHoose