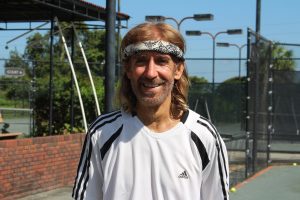 We have a generation of children living a sedentary lifestyle. Who hasn’t tried to wrestle a cell phone from their grandchildren’s hands? Harbor Hills USPTA Elite Professional and Tennis Director John Natolly calls it an inactivity pandemic among our youth.

Classes are geared to encourage a love of the sport. Training includes proper fundamentals, games and basic drills. Junior Tennis Camps will also be offered this summer. Sessions are June 13-16 and July 18-21. Contact John for more info at 352-804-8400. 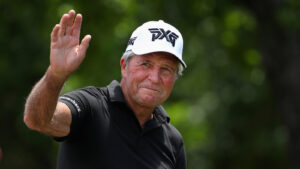 As the oldest player in the field at the PNC Championship Pro-Am in December, Player sunk an amazing birdie putt on the eighth hole! He played the tournament with his grandson Jordan at the Ritz-Carlton Golf Club in Orlando. Tom Leimberger, Harbor Hills golf pro explains. “Golf fitness improves flexibility, range of motion and balance,” he said. “All are critical factors in increasing swing speed, which results in greater distance.”

Diet and exercise also contribute to increased energy and a positive mindset. Our dear Harbor Hills friend Les Johnson is a perfect example. At age 91, Les has shot his age and under 967 times! In 2017, Les won the bronze medal for golf at the National Senior Games in Birmingham, Alabama. His impressive feat has become legendary in our community. What is his secret? A daily stretching and fitness routine and a bowl of Wheaties every morning.

As Player said, “The harder you work, the luckier you get!”

MOTHERS DAY BRUNCH AND THE HHLGA BY NIKKI HOFFMAN 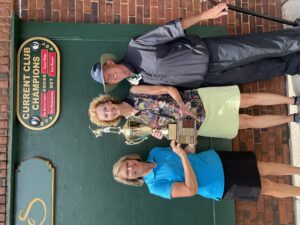 Celebrate Mom with brunch on Mother’s Day. The special day is next Sunday. It’s a time to enjoy being mom, stepmom and grandma to children and grandchildren of assorted ages. Of course, being a mom to a loving pet counts, too.

Harbor Hills Country Club invites you to enjoy a Mother’s Day brunch on May 8 from 11a.m.- 4p.m. Start with our spectacular view overlooking Lake Griffin. Then enjoy a served salad, followed by a buffet featuring Mom’s favorites. Cost is $41.99 per adult. Children ages 5-10 are $16.99. Children under 5 eat free. To purchase non-refundable tickets, call 352-753-7000. Reservations are required.

The competitive spirit is alive and well in Harbor Hills. The Ladies Club Championship was an exciting golf event recently held for members of the Harbor Hills Ladies Golf Association. Seven flights of thirty golfers were fielded with both gross and net winners. The club champion is Wanda Kurka who won by five strokes over Catherine Sendell. The net winner is Terri Winefordner.

A special thank you is extended to outgoing president Wanda Kurka for her leadership and inspiration. Vice President Ann Mahoney will become the new 2022-2023 Harbor Hills Ladies Golf Association president starting May 12. Congrats as well to Linda Reyome, the new VP.

Enjoy a challenging round on our rolling hills and explore our many amenities. Non-resident and summer memberships are available. 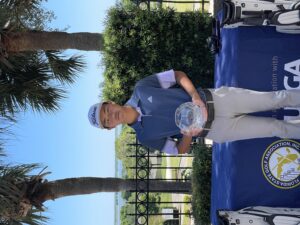 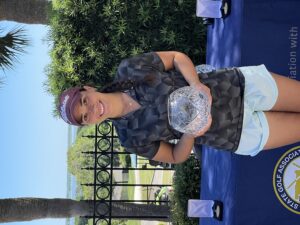 Windy conditions did not deter one motivated group of young golfers from swinging their way to the Florida Junior Tour trophy. The Florida Junior Tour (FJT) is considered the premier championship series for youth in the Southeast. FJT events are held at many of the state’s most challenging and premium courses. In mid-April, Harbor Hills proudly hosted 77 young, ambitious golfers for this challenge.

The junior tour is conducted by the Florida State Golf Association, a volunteer organization of 500 individuals who provide support for junior and amateur golf in their local areas. The Association, headquartered in Tampa, provides college scholarships and grants for those aspiring golfers. Volunteers assist with tournaments, state championships and USGA qualifying events. Former players of the junior tour include Brooks Koepka, Daniel Berger and Lexi Thompson.

Individual gross stroke play was the format for the two-day, 36 hole challenge at Harbor Hills. Boys and girls ages 16-18 competed.  Jackie Twitty, FSGA tournament manager, stated the course was in great shape and a challenging test for the juniors especially with Saturday’s windy day! Reggie Zhu from Winter Garden and Izzy Pellot from Orlando battled it out to win their trophies.

This summer, the 2022 Junior Florida Cup will be played in a Ryder Cup format. North Florida versus South Florida for the win! Sixteen junior player teams play three 18 hole matches over two days. The winning team takes home the trophy as well as bragging rights for the year!

Preserving and promoting the game of golf starts with our youth. For pictures of the winners of the Harbor Hills Open and more info on the Florida Junior Tour check out https://www.fsga.org.

THE PROMISE OF SPRING BY NIKKI HOFFMAN 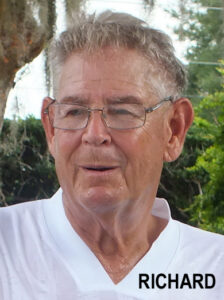 Springtime brings out the best in us. Flowers are blooming, the air is sweet and the outdoors beckon for us to come out to play! Stories of inspiration fit particularly well this time of year. Richard Baker of Harbor Hills has a relatable story that provides both inspiration and hope.

Richard hails from Williamsport, Pennsylvania. Heartened by his Dad’s encouragement, he started playing tennis in 6th grade. Richard continued his sport in high school and later in college at East Stroudsburg University. His success qualified him to participate in USTA sanctioned tournaments in the Middle States and he was regionally ranked.

In 2016, a severe bicycle accident tore three tendons in his left leg. The injury impacted Richard’s ability not only to play sports, but to fully enjoy mobility and life. Enter Harbor Hills Tennis Pro John Natolly and friend Steve Stephens, an active member of the Harbor Hills Racquet Association. With their help and Richard’s grit and determination, he was able to return to the court. Richard now plays in tennis socials four to five times a week as well as rounds of men’s and mixed doubles!

HHRA’s outgoing president Giac Modica has given endlessly of his time and skill over eight years of leadership. As he steps down, the responsibilities and duties will now be filled by the association’s new president, Richard Baker. Richard is excited to organize monthly social events and promote more interclub play.

Richard’s story reminds us to believe in ourselves and the power of intention. Caring and positive people help us reach goals we never thought possible. Yes, spring is the perfect time to renew our hope and begin again. 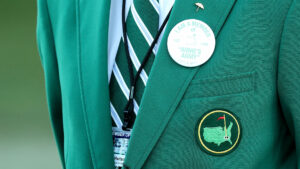 Augusta National Golf Club is the home of golf’s first major tournament, The Masters. The Champions Dinner, the Par Three Challenge and the Green Jacket ceremony are traditional events. The Green Jacket is awarded to the champion by the previous year’s winner. The winner keeps his jacket at home for one year. After that, it is kept at the club and only worn by the recipient for special events.

The Harbor Hills 4-Man tournament was next. Congrats to the First Place winners Ron Nisun, Mike Reyome, Jim Wohrley and John Nelson. The Member-Member Match play tournament will be played on April 20, 22 and 24.

Our Ladies Swingin 9’ers had their Sadie Hawkins tournament last month. Congrats to first place winners Bob and Lorraine Kasse and Fred Saxine and Bridget Templeton. A fun time was had by all! Congrats as well to flight winners Diane Raymond, Carol Langan and Carol Ryan who grabbed winning scores in the 9’ers Ringers Tournament.

The late professional golfer Payne Stewart has said, “In the end, it’s still a game of golf. At the end of the day, if you can’t shake hands with your opponents and still be friends, then you missed the point.”

Wishing all our friends and family a meaningful Passover, a memorable Easter and a season filled with good health and happiness. 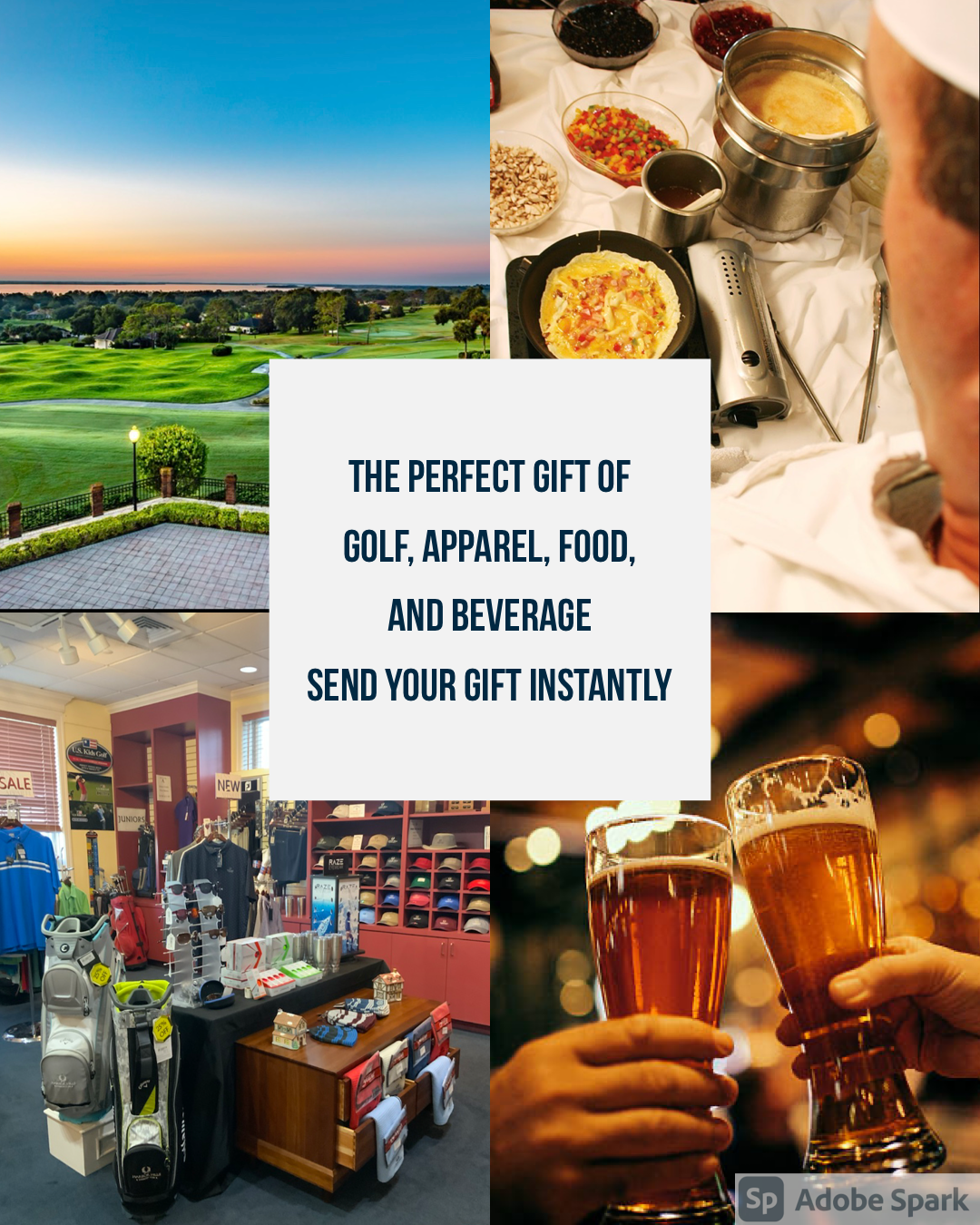