COURAGE COMES IN MANY FORMS BY NIKKI HOFFMAN 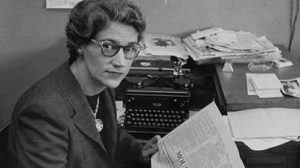 Many of us remember the 1956 volume of short biographies titled Profiles In Courage, written by then-Senator John F. Kennedy. The book profiles eight Americans who defied popular opinions to do what they felt was right. Mabel Norris Reese could easily have been included in this courageous group.

Reese was editor and owner of the “Mount Dora Topic,” a small Lake County newspaper from 1947 to 1960.  She is best remembered for her oppositional opinion pieces. Reese questioned the veracity of the local sheriff Willis McCall after the erroneous arrest of four young black men in Lake County in 1949. Once Reese realized the sheriff was lying, she bravely exposed him, his department and supporters.  In 2012, author Gilbert King wrote the book Devil in the Grove. It recounts the story of attorney Thurgood Marshall’s defense of the Groveland Boys, as the four men were now known. Mabel Norris Reese exposed the cover-up in spite of unrelenting intimidation.  She passed in 1995 at age 80 at her home in Daytona Beach.

Friend and Harbor Hills neighbor Frankie Smith is on the committee to put forth Mabel Norris Reese’s nomination into the Florida Women’s Hall of Fame. Reese’s statue will be unveiled in Mount Dora. The event will be attended by author Gilbert King, sculptor Jim McNalis and Mabel’s granddaughter, Cindy Chesley Erickson. “We are very pleased to see Mabel Norris Reese recognized,” Frankie explains, “She was a courageous journalist who set out to find the truth, speak the truth and write the truth.”

Join Smith at the statue unveiling in Sunset Park in Mount Dora at 10 a.m. on September 24th.  For more information on Mabel Norris Reese, visit: http//www.remembermabel.com.