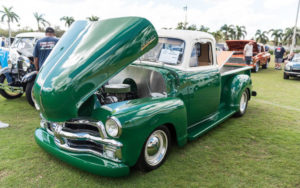 What do these iconic movies have in common? Thunder Road, 1958; American Graffiti, 1973; Smokey and the Bandit, 1977; The Blues Brothers, 1980 and Gran Torino, 2008? They are some of the best-known displays of American muscle cars in film history! Some may argue that Steve McQueen, Clint Eastwood and Burt Reynolds took a ‘back seat’ to these classic cars that quickly gained prominence with the American public.

Ohio native Sam Metro can tell you all about the history of muscle cars, hot rods and most classics on four wheels. He’s been hosting vintage car shows for ten years. “It  started with my interest in hot rods and grew into a passion for all sorts of specialty vehicles.” Sam explains that America’s fascination with hot rods originated with soldiers returning from World War II. Looking for excitement and speed, they sought out bigger and more powerful engines for their vehicles.

1965 to 1973 were the golden years of muscle cars. Anyone who liked to drive fast wanted a car with muscle. Hot rodders took basic cars and installed big engines in them. Manufacturers noticed and responded. And so, the muscle car was born!

This Saturday, Harbor Hills Country Club is hosting a fabulous show of hot rods, custom cars, muscle cars, antique and specialty vehicles and you are invited! Live music and entertainment will be provided by WJBJ Cruisin’ With The Classics. Admission and parking is complimentary. Food will be available for purchase. Meet Sam and other specialty car owners from 11AM to 3PM. To show your vehicle, contact Sam at 352-449-9732 or motor up to beautiful Harbor Hills. Fans of the 1991 movie Thelma and Louise just might see a 1966 Thunderbird cruise in!

For your safety Masks are required to enter Clubhouse & Pro Shop