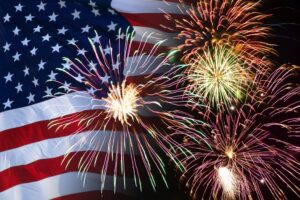 Baseball, hot dogs and apple pie! Yes, Monday is July 4.  We are incredibly blessed to be Americans. The holiday is a special day of unity and celebration that clearly transcends what divides us.

The American spirit has its roots within the hearts of the courageous pilgrims who came to America to gain independence from Britain. Although there are many versions of these events, one thing is sure; the voyage was indeed a response to the religious persecution that the pilgrims and Puritans experienced in England in the early 1600’s.

And so, the indominable American spirit was born, emerging as a celebration of freedom of religion, expression and movement. The Bald Eagle was selected as our national symbol on June 20, 1782. The beauty of this powerful bird is a reminder of our nation’s fierce independence and strength.

We Americans are an authentic, curious, and innovative bunch, imbued with a strong sense of justice and fair play. Our inventions have changed the modern world, such as life-saving robotic surgery, lasers, the GPS system, mobile phones, personal computers and much more. We may be in flux politically and culturally. Nevertheless, we take great pride in the freedom to have differences of opinion. That is what make us uniquely American.

Harbor Hills will raise the flag and celebrate July 4th with a scramble golf tournament and a traditional All-American Independence Day cookout. Red, white and blue decorated golf carts will adorn our picturesque course on that special day. So let’s enjoy those hot dogs and apple pie. And raise a glass for our glorious country and our hopes and excitement for the future. Let freedom ring!