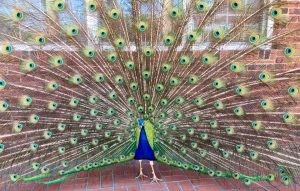 A legend is a story that is passed down through generations. It’s often fact-based with a touch of the mystical. Did you know that Harbor Hills has a legend all its own? Forty-four years ago, the story goes, a traveling salesman purchased a few peacocks to keep his wife company while he was on the road. The property was adjacent to what would become Harbor Hills. Over the years, the peacocks found their way to our community. Visitors are greeted by a unique sign: “Peacock Crossing!”

Tail feathers are often more than a yard long. When spread out in the sunlight, nothing is more graceful. Angela Rogers, Harbor Hills Design Coordinator, is delighted by the showy fans as she enters the clubhouse daily. “Spring has sprung,” she explains, “and our peacocks are showing their beautiful fans for all to enjoy.”

Legends are also created by the enthusiastic golfers at Harbor Hills. The Men’s Golf Association played their Member-Member Stroke Play Tournament on March 24, 26 and 28th. The three-day event was followed by an awards dinner on Sunday. The winners were: Flight 1, Chris Delzio and Ted Sartin; Flight 2, John Bircher and Ken Bishop; Flight 3, Ray Barr and Joe Redoutey and Flight 4, Shad Shadoin and Ray Edmiston.

The Harbor Hills Ladies Golf Association hosted their club championship last week. An awards luncheon concluded the two-day event. The club champion is Nancy Weiss winning by two strokes over Wanda Kurka. The net winner is Judy Warren, winning in an exciting playoff against Catherine Sendell and Janet White-Cofer. Congrats to all who participated! Special kudos go to Bob Burns who aced the Par 3 fifth Hole on April 1.  (This is not an April Fools joke!) Congratulations, Bob!