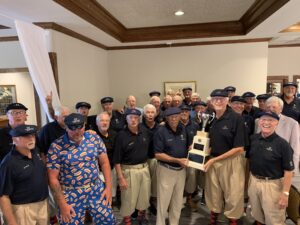 This is the season of traditions and Harbor Hills has a few traditions of its own. Twenty-eight years ago, Harbor Hills premier golf event, the Sider Cup, was created. Mike Reyome, President of the HHMGA explains that the October tournament brings together our golfing community to enjoy the ten-day event. This year, the captain of the Blue team was Ron Hanner. The Red team captain was Steve Gordon. Their respective assistant captains were Bob Kasse and Larry Coburn. Ron Nisun did an amazing job as Tournament Director.

Sixty-eight players participated, thirty-four on each team. The Blue team led on Day One by eight points and on Day Two by nine points. The Red team came roaring back on Sunday at the singles match play. In the end, the Blue team triumphed by only three points, 35.5 to 32.5. Congratulations to both teams for an exciting finish!

The annual Ladies Red/Blue tournament has become an integral part of Sider Cup festivities. The Red team reclaimed their title with a win this year. Becky Hanner, Chairperson and Co-chair Bille Neese did a great job organizing this event. Ann Mahoney, President of the LGA, prepared the pairings. Lorraine Kasse’s table decorations at the luncheon afterwards, were beautiful.

Still going strong at age 92, is our own Harbor Hills golfing legend Les Johnson. He has shot his age over 1,000 times and was honored with a plaque commemorating his achievement.

From the Captains Dinner to the Awards Dinner and everything in between, the Sider Cup is a lively tradition at Harbor Hills. As golf member Bill Bogert explains, “The best part of the tournament is socializing with the golfing community and enjoying life in Harbor Hills.”