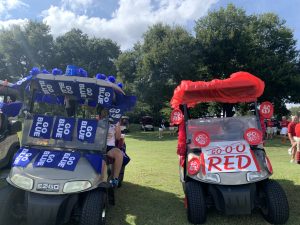 This is the season of traditions and Harbor Hills has a few traditions of its own. Twenty-seven years ago, Harbor Hills premier golf event, the Sider Cup, was created. The October tournament brings together our golfing community to enjoy the 8-day event. This year, the captain of the Blue team was Bill Collier. The Red team captain was Bill Bogert. Their respective assistant captains were Larry Skoch and Steve Gordon.

Sixty-four players participated, 32 on each team. The Red team led on Day One by two points and on Day Two by one point. The Sunday singles match play saw the Blue team advance to a 34.5 to 28.5 win. Congratulations to both teams for an exciting finish!

Six MVP players won all three of their matches. For the Red team, they are Ken Bishop, Chape Chapin, Cliff Murphy and Mark Thompson. For the Blue team, they are Jim Cochran and Dan Lasdow. The very first hole-in-one in Sider Cup history was made by Larry Coburn on the 5th hole.

The annual Ladies Red/Blue Tournament has become an integral part of Sider Cup festivities. HHLGA President Wanda Kurka, Vice President Ann Mahoney, Janet White, Lynda Collier and Becky Hanner did a great job organizing the fun, along with the help of many Ladies Golf members. Congrats to the Ladies Blue team for the win!

From the Captains Dinner to the Awards Dinner and everything in between, the Sider Cup has become a lively tradition at Harbor Hills. “Competition is great,” Red Captain Bill Bogert explained, “but the best part of the tournament is the camaraderie, socializing with the golfing community and enjoying life at Harbor Hills.”