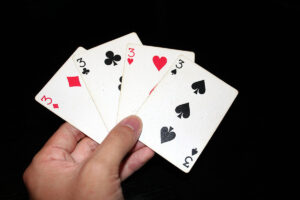 The word “Shanghai” conjures up images of old movies (think “Shanghai Express” with Marlene Dietrich) as well as more recent ones (“Indiana Jones” starring Harrison Ford). Intrigue and excitement are synonymous with the name. For history buffs, the port city of Shanghai is fascinating. The two Chinese characters in the city’s name mean “Upon the Sea.” By 1700, Shanghai was a large and prosperous port exporting silks, tea and porcelain.

In the 19th century, clipper ships in the China trade required a great deal of labor to operate. This gave rise to the practice of kidnapping people to serve as sailors by coercive techniques using trickery and deception. Shanghai was a common destination for ships with abducted crews. Hence, the modern term means to put someone in an undesirable position by pretense.

For one special group of Harbor Hills women, Shanghai has a completely different association. Every Friday afternoon, they gather for an intricate game of Shanghai rummy. The object is for players to organize all their cards into sets. Play ends once a player has arranged all her cards into sets or melds. This is called “going out,” because the player has played the last card in her hand.

Country club member Fran Novak loves the game and has been playing for years. “It makes you think,” she explains, “and you get a chance to catch up with neighbors and happenings in the community.”

Bring your nickels, dimes and quarters and join the members for weekly play. Sign-up sheets are located on the bulletin board in the Ladies Locker Room. All members of Harbor Hills Country Club are invited and encouraged to join.