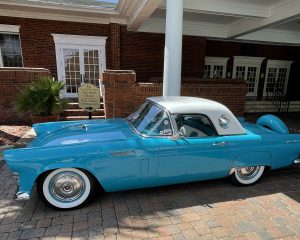 The Ford Thunderbird is a classic chapter in auto history and has a heritage all its own. The car, with its unique features and styling, made its first public appearance at Detroit’s 1954 auto show. This personal luxury car was the first Ford 2-seater since 1938 as well as the most expensive Ford available.

The signature name “Thunderbird” pays homage to the mythology of Native American tribes. The Thunderbird is a supernatural bird that rules the sky. The rich history of the Ford Thunderbird is one that Ralph Cowell, Past President of the Rotary Club of The Villages, knows well. He recently formed the Central Florida Classic Thunderbird Club. Last month, twenty-eight club members arrived at the Harbor Hills Country Club. The Retro Bird Club joined the Classic/Baby Birds Club for fun and a delicious brunch. Fourteen birds were parked under the portico in front of the clubhouse. It was a unique display and a great picture-taking opportunity.

Harbor Hills neighbors Steve and Eileen Gordon are proud owners of both a 1955 baby bird and a 2005, the 50th anniversary bird. Steve explained that it took almost two years for the couple to find the right match, but they did! Harbor Hills friends David and Annette Rystrom enjoy their 1956 T-bird. David said that although T-Birds are known as a luxury ride, “they are capable of reaching speeds from 173 mph to 241 mph as clocked by Knot Farrington’s street legal ’56 T-Bird.”

The Central Florida Classic Thunderbird Club meets at 5PM at Michelle’s Cuisine restaurant in the Belks Plaza on the last Monday of the month. For more information, contact Ralph Cowell at rotaryralph@hotmail.com.