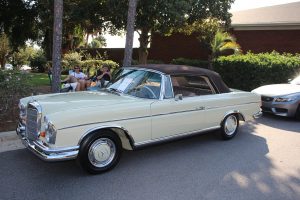 Roth explains his affinity for German cars is due to their high level of engineering excellence and craftmanship. German auto production also excels in safety and technological advances. In 1978, while scouting for the “cheapest luxury car in California,” Roth became the proud owner of a 1979 Mercedes Benz 300 SD Turbo Diesel. He enjoyed his green-silver ride for the next thirteen years. Joining The Villages community in 2017, Roth’s love of the brand inspired him to create the M. Benz Club. Starting with only one other like-minded neighbor, the club now boasts 250 members.

In keeping with the Octoberfest theme, entertainment for the event will be provided by The Villages German Band. A fifteen-piece brass band will play lively Bavarian-style music over a superb sound system. Twelve vendors will offer products and services including Mercedes Benz of Gainesville and Gettel Automotive Group, a BMW and Porsche dealer. Trophies will be awarded for best of brand and Best of Show.  There will be vendor door prizes, at the end of the show. Lunch and beverages can be purchased at Harbor Hills Country Club.  The indoor Café will be open.

All proceeds from this unique event will support The Villages Dollars for Scholars. This scholarship assistant fund has a grassroots focus. Called “the power of community,” thousands of volunteers and donors participate to help local students in their own backyard. College and vocational scholarships are awarded to students who are residents of Lady Lake, Wildwood and the surrounding areas. The public is encouraged to make any suitable donation for a ticket.